…I’m a Toys R Us kid! Am I the only one sad about the ending of an era? And the fact that my child will never understand the greatness of what used to be toy heaven? No? Okay then. Guess it’s a good thing she’s so little and doesn’t have to worry about it. 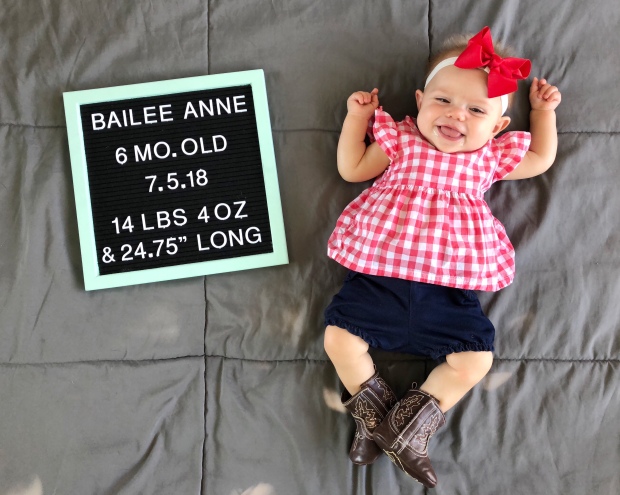 Y’all… we’ve hit the 6 month old mark. I’ve kept this child alive and well for half a year now and I’m wondering where all the time went. Feels like just yesterday I was carrying her, announcing to the world that we were pregnant. Now here we are, reaching milestones and still learning about this thing called life.

Summer is upon us and Texas weather is disgusting. Hot, humid and way too many bugs. Yet my child seems to only get calm when you take her outside and STAY outside. She loves sitting in her walker, watching the pups play and the ducks waddle on by. The heat doesn’t seem to phase her and she likes the water.

She’s learning something new every day and trying new things. We work on her strength a lot, from sitting to rolling, standing to pulling herself up. She gets distracted very easily and so trying to accomplish a 15 minute session is difficult. I try to teach her words with a an object and sing to her. However, the only thing she cares about is putting anything she can grab in her mouth.

We celebrated our first Father’s Day and tried to make Matt feel as special as possible to show our gratitude. She just loves her daddy and smiles way more at him than she does with me. Each day she becomes and looks more like him. Daddy’s girl is an understatement.

I would love to be able to do more and take her further places, but she is still fairly unpredictable and it’s not worth chancing her happiness and my sanity. But I will say this, she is a heck of a lot better than she used to be. I can go shopping without a random scream fest. And she’s actually pretty good in the car seat now. It’s made going places much easier.

Sleep: I’ll give her credit, this one is champ at sleeping 9-10 hour stretches at night now. Minus the early waking at 5-5:30am and starting our day then. Her naps are pretty good, usually taking a nap on me, which I don’t mind. I’m exhausted too. Now that she can roll, she finds her tummy or side most comfortable. We even made the transition from rocker to her pack n play, and to arms free. We are currently working on self settling to sleep so we don’t have to spend upwards to an hour getting her into a deep sleep before we put her down.

Feeding: We’re still feeding on demand, but mostly every 3-4 hours. We’ve been doing solids at lunch only and boy does she love her fruits and orange veggies. She’s starting to understand what the Bumbo, tray and bib mean and she gets pretty excited about it. We’re starting dinners at 6 months and get to try out even more new flavors.

Growth: Bailee is going to be a little girl. I could’ve sworn she was over 15lbs, but turns out at her 6 month checkup that she was only 14lb 4oz (13th percentile). She’s also coming in at just under 25” at a whopping 24.75” (7th percentile). But her doctor isn’t worried; she says she is amazingly healthy and is just going to stay a petite baby.

Strength: Talk about trying to move ahead of the game. Bailee is now rolling every which way with no problems. She’s working on holding herself up. And has even semi pulled herself up a couple times. She can sit up on her own for a good amount of time (with me or the boppy behind her), but would much rather roll now that she’s got that skill. She’s even recently tried to start crawling with her chest down and butt up. 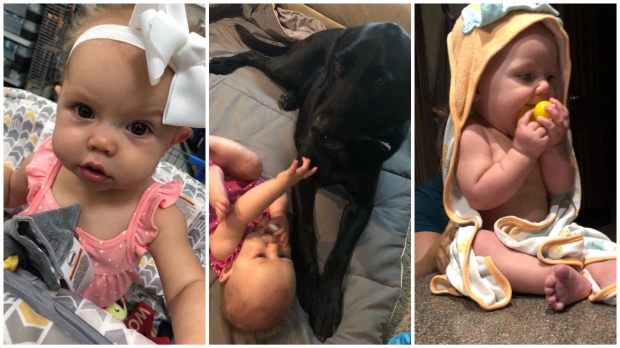 Interests: Still is obsessed with her toes and just about anything she can fit in her mouth. She loves to swat her left arm up and down, especially in the pool. She’s learned how to smack stuff and even throw things. But mostly she’s excited that she can pass things from one hand to the other. She’s starting to love her cartoons (and I love the quiet time).

They weren’t kidding when they said it goes by fast. My little bear is growing so fast and making leaps and bounds in her development. Before I know it, she’ll be a year old and walking and talking.

The Year of the Introvert
Adventure Is All You Need

There are no boundaries in motherhood!